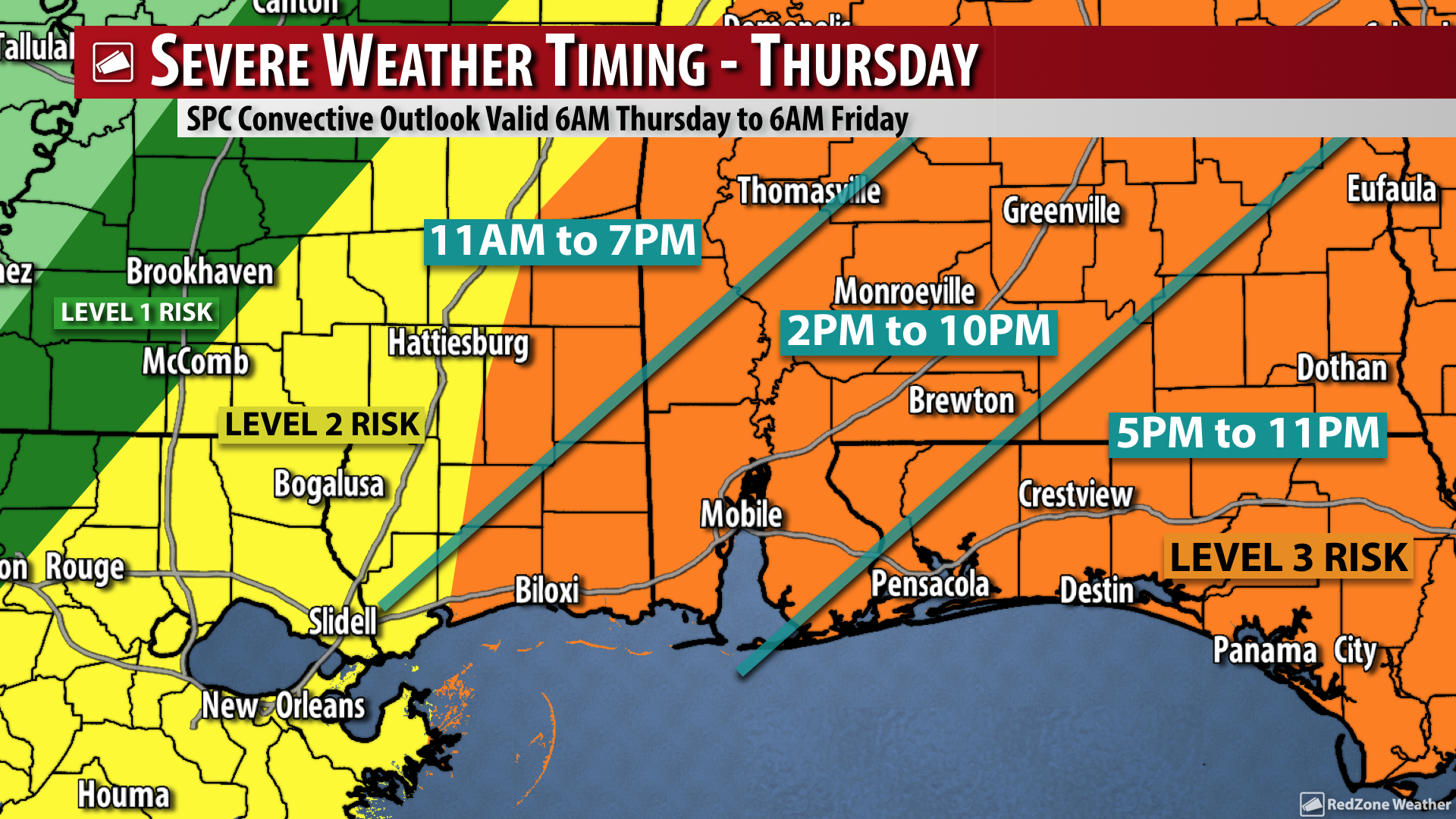 Overview: Two distinct rounds of severe thunderstorms will be possible across parts of south Alabama and northwest Florida on Thursday, April 23. One round of strong to severe storms in the morning is expected to be less impactful and affect inland areas of south Alabama. The other round of severe storms could be quite impactful, with multiple tornadoes, damaging winds, large hail, and flash flooding being possible. There is a chance a few of the tornadoes could be strong (EF2+), although confidence in that idea is not high at this point.

Threat Levels & Locations: The Storm Prediction Center has ALL of south Alabama and northwest Florida involved in their Level 3 (out of 5) risk, meaning numerous severe storms will be likely across the area.

When: There will be two distinct severe weather risk timeframes on Thursday. The first risk will be a lower-end risk of damaging winds, brief tornadoes, hail, and flash flooding from 5AM to 2PM. This lower-end risk is mainly for inland areas of south Alabama. The second, likely more significant, risk starts at 2PM and extends to 11PM. This is the window when tornadoes (maybe a strong tornado or two), damaging winds, large hail, and flash flooding will be possible. While 2PM to 11PM is the timeframe, the core of this risk will probably be from 4PM to 9PM.

As always, please let me know if you have any questions or have specific decision support needs. Below is the public, long form post that will debut with my next video at 7AM. Thank you!

SEVERE STORMS LIKELY THURSDAY; LEVEL 3 (OUT OF 5) RISK… Multiple rounds of severe weather will be possible tomorrow (Thursday, April 23) with tornadoes, damaging winds, large hail, and flash flooding being possible across ALL of south Alabama and northwest Florida. One round will likely be a decaying squall line that moves across our area on Thursday morning, while the more potent round could feature intense supercell storms that may produce tornadoes. There is a chance some of the tornadoes could be on the strong side, although there is uncertainty with that idea still this morning. The Storm Prediction Center basically left the convective outlook nearly the exact same as it was yesterday, although we do note more of west Alabama (Choctaw, Marengo, and Sumter counties) are now in the higher Level 3 (out of 5) risk. Those 3 counties join the rest of us across the southern half of Alabama and all of northwest Florida in this Level 3 enhanced risk. Further outlook upgrades and modifications are possible over the next 24 hours. After the severe weather on Thursday, it looks like we get an extended break from the active weather for awhile as we have officially stripped out the risk of storms for Sunday! Let’s look at all of your forecast details.

NICE TODAY, CLOUDS INCREASING… Partly cloudy skies this morning will give way to increasing cloudiness later this evening. High temperatures on this Wednesday will be in the mid-80s. We are not expecting any severe weather issues until Wednesday morning locally.

ISOLATED SHOWERS POSSIBLE TONIGHT… There could be a few areas of rain around this evening, tonight, and into Thursday morning. Tonight, the best chance of a few showers and maybe a storm or two will happen over west Alabama. Most spots will remain dry till Thursday morning.

ISOLATED STRONG POSSIBLE ON THURSDAY MORNING… The first round of strong to severe thunderstorms on Thursday will happen in the morning hours. Storms may start as early as 5AM over west Alabama, but for most of us, this round of storms will be from 7AM to 11AM. I expect this decaying squall line of storms to move in from southeast Mississippi and continue to weaken as it moves eastward across the inland parts of our region. There is a chance that during the morning hours of Thursday that coastal areas remain completely dry and miss the first round of storms entirely. I would go as far to say that is likely at this point. It’s not certain, but there is a good chance this weakening line of storms won’t be impactful for most locales. There could be a few isolated severe storms as the line rolls through, with the main concerns being damaging winds and maybe a brief tornado or two.

MORE SIGNIFICANT STORMS LIKELY P.M. THURSDAY… Thursday afternoon, and especially into the evening hours, is when I expect the highest potential for severe thunderstorms locally. Large, supercell thunderstorms will be the main concern. These supercells will likely fire up across southeast Mississippi or west Alabama and move across our region from west to east. The concern in these supercells will be tornadoes and large hail. Some model indications point to the potential for strong tornadoes, but there is less certainty in that idea at this moment because we just don’t know exactly HOW impactful the first round of storms in the morning will be. If the squall line in the morning “overperforms,” it could really work over the atmosphere thus leaving little instability for storms in the evening to use. There also has been some guidance showing more rain to the south across coastal areas that could limit inflow to the supercell storms to the north. Another train of thought suggests there could initially be supercells over west Alabama that converge into more of a squall line that would elevate the damaging wind risk but mitigate/lessen the overall tornado risk. All of these intricacies add to the overall uncertainty of the situation, which is why we don’t have a higher risk level (Level 4) in place as of this moment.

POTENTIAL HAZARDS – THURSDAY… All modes of severe weather will be possible, including tornadoes, damaging straight line winds, large hail, and flash flooding. The greater tornado risk will likely set up across inland counties, but at this point we cannot rule any local area out of the risk zone. We all have a risk of severe weather until late Thursday evening.

UPDATED THIS MORNING: SEVERE WEATHER TIMING ON THURSDAY… There will be two distinct severe weather risk timeframes on Thursday. The first risk will be a lower-end risk of damaging winds, brief tornadoes, hail, and flash flooding from 5AM to 2PM. This lower-end risk is mainly for inland areas of south Alabama. The second, likely more significant, risk starts at 2PM and extends to 11PM. This is the window when tornadoes (maybe a strong tornado or two), damaging winds, large hail, and flash flooding will be possible. While 2PM to 11PM is the timeframe, the core of this risk will probably be from 4PM to 9PM. Big takeaway: Please have a way to get urgent weather warnings all day on Thursday and into the late evening hours!

WARM & SUNNY ON FRIDAY… We get a well-deserved long break from severe weather starting on Friday! Yep, that’s right, Friday. The severe weather risk for Sunday has been stripped from the forecast (more about that below). Sunny skies are expected on Friday with high temperatures in the mid-80s.

FEW SHOWERS SATURDAY MORNING… There is a chance we could have a few passing showers and general (non-severe) thunderstorms on Saturday, particularly in the morning hours. Some communities probably will have no rain at all while others may have a passing storm. There could be some thunder involved at times but this will definitely be a round of showers and storms where the “bark is worse than the bite” for many places. Cloud-to-ground lightning could happen in the stronger thunderstorms but severe weather is not expected. Partly cloudy skies are expected on Saturday during the afternoon hours with high temperatures in the mid-80s.

NO MORE SEVERE WEATHER RISK ON SUNDAY… I am thrilled to conclude the forecast sections of this post by being able to report that we have stripped out the chance of showers and thunderstorms for Sunday. There is now no longer a severe weather risk for Sunday at this point! Some earlier model guidance pointed to a round of storms, but that is now off the table. Sunday into Monday will be sunny and warm with no rain expected. High temperatures will be in the low- to mid-80s with morning lows in the 50s. Next week shows the potential for a few showers and perhaps some thunderstorms on Wednesday, April 29.

TORNADO WARNING POLICY… Any time there is an active tornado warning in effect for southwest Alabama or northwest Florida, we provide uninterrupted, live video coverage on Facebook Live and in the RedZone Weather app. Our detailed coverage commitment is outlined at redzoneweather.com/coverage. We are proud to cover all parts of Escambia (AL), Covington, Monroe, Conecuh, Baldwin, Mobile, Clarke, Washington, Butler, Escambia (FL), Santa Rosa, and Okaloosa counties. If you live in any locale in those counties, be sure to tune into our coverage whenever there is an active tornado warning!

APP ALERTS… Now is the time, long before we get to this severe weather potential, to set up the RedZone Weather app on your smartphone! redzoneweather.com/app is the link where you can download the iOS or Android version of the app. Once you have the app downloaded to your device, be sure to visit the Alerts tab (lower right corner of the app), then tap the large, yellow Alert Settings button to customize the alerts you would like to receive straight from me.

I will have more updates later today in the RedZone Weather app. My next long form, detailed post will be available tonight when we assess the situation for Thursday. See you then!