RZW EXEC: CRISTOBAL – THURSDAY UPDATE… RZW Exec partners, good Thursday evening. Cristobal has weakened to tropical depression status over the mountainous terrain of Mexico and Guatemala. This was expected as land interaction continues. Overall, the forecast for this tropical system remains essentially unchanged from yesterday. This is a good thing as confidence in the forecast continues to grow. Cristobal will likely begin to move northward later tonight or on Friday. The system will likely strengthen gradually as it marches across the Gulf of Mexico from the Yucatan Peninsula toward Louisiana. The National Hurricane Center continues to suggest Cristobal will be a moderate tropical storm (max. winds near 60 mph) at landfall in Louisiana on Sunday or early Monday morning. We will continue our public messaging suggesting the greatest hazard for our local area will be heavy rain that could lead to flash flooding this weekend. Gusty winds (20-30 mph) will be possible at the immediate beaches. There could be a risk of a few isolated, spin-up tornadoes, although confidence in this idea remains a bit more uncertain. In addition, dangerous rip currents and large waves (beach erosion) will be a concern for the immediate coast. Looking at the positives in this situation, there is a high chance that our local drought conditions will continue to improve in part due to Cristobal.

Overview: Tropical Storm Cristobal (currently a tropical depression, but expected to re-strengthen into a tropical storm) will make its closest approach to our local area Sunday night into Monday. Cristobal will bring a period of wet/stormy weather to our region with heavy rainfall and flash flooding being the main concern. Isolated, brief tornadoes may become an issue near the immediate coast. At this point in the forecast, high winds are NOT expected locally, although gusty (20-30 mph) winds will be possible near the coast on Sunday, Monday, and into Tuesday.

Threat Levels & Locations: ALL of south Alabama and northwest Florida will have the potential for heavy rain and flash flooding this weekend into early next week. The tornado risk will likely be confined to the immediate coastline, although a conditional risk of isolated tornadoes may set up across west Alabama. Gusty winds will happen at the immediate coastline.

When: Heavy rain will be possible from Saturday through Tuesday. The risk of isolated tornadoes will be greatest Sunday into Monday.

Potential Hazards: Heavy rain and flash flooding will be the main concern. Isolated tornadoes will be possible, especially near the coast. Coastal flooding and beach erosion will be possible. Dangerous rip currents and large waves are expected at all local beaches.

Forecast Confidence: High. Model guidance has continued to point to a Louisiana landfall for Tropical Storm Cristobal, thus it looks like our overall impacts discussed above won’t change that much.

As always, please let me know if you have any questions or have specific decision support needs. Below is the public graphic that will be posted later today. Have a great weekend! 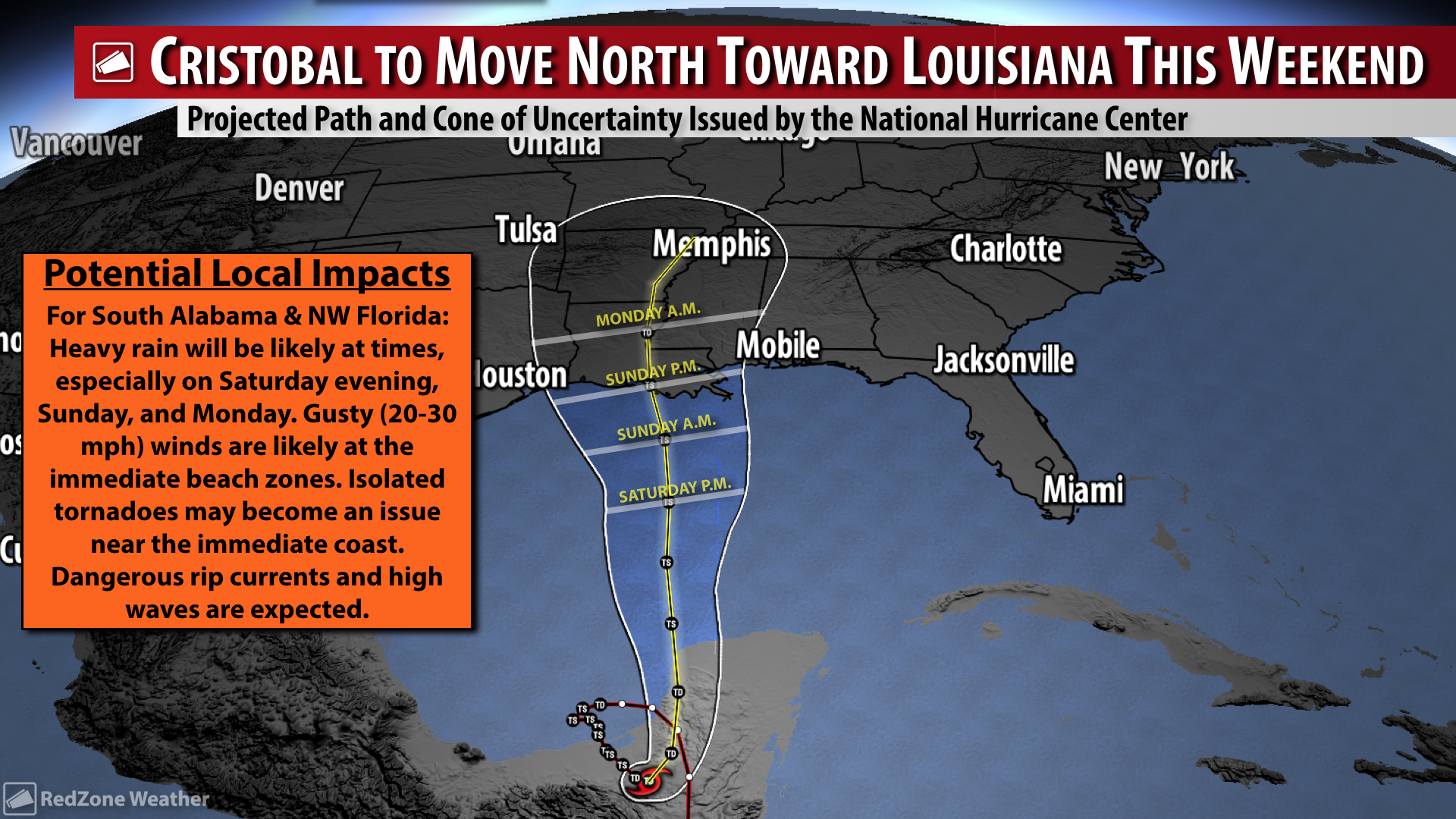