RZW EXEC: TROPICAL DEVELOPMENT POSSIBLE IN GULF… RZW Exec partners, good Thursday evening! We are initiating RZW Exec bulletins on a tropical disturbance that has a growing chance of becoming a tropical storm early next week in the southeastern Gulf of Mexico. There is currently an area of cloudiness and disturbed weather situated to the east of The Bahamas. This tropical disturbance will move westward and over The Bahamas tomorrow (Friday) into Saturday, and then over South Florida Saturday into Sunday. The disturbance is expected to emerge into the southeastern Gulf (areas west of Ft. Myers, FL) Sunday into Monday. That is when the system may become a tropical storm. Upper-level winds seem favorable and sea surface temperatures are like a hot-tub in that part of the Gulf (running 85-87 degrees!). We will need to closely monitor this system as early model guidance does suggest a potential path toward the northern Gulf Coast. Way too early to know specifics, but I would suggest interests from Morgan City, Louisiana eastward to Apalachicola, Florida (including our entire local area) should begin to at least be aware of this system. I’ll have your next RZW Exec bulletin emailed to you by 7PM on Friday. Below, you’ll find our public post detailing each tropical system we’re tracking this evening. While the tropics are quite active, this is at least somewhat expected as we climatologically are in the peak days of hurricane season. As always, please let me know if you have any decision support needs. Thanks! 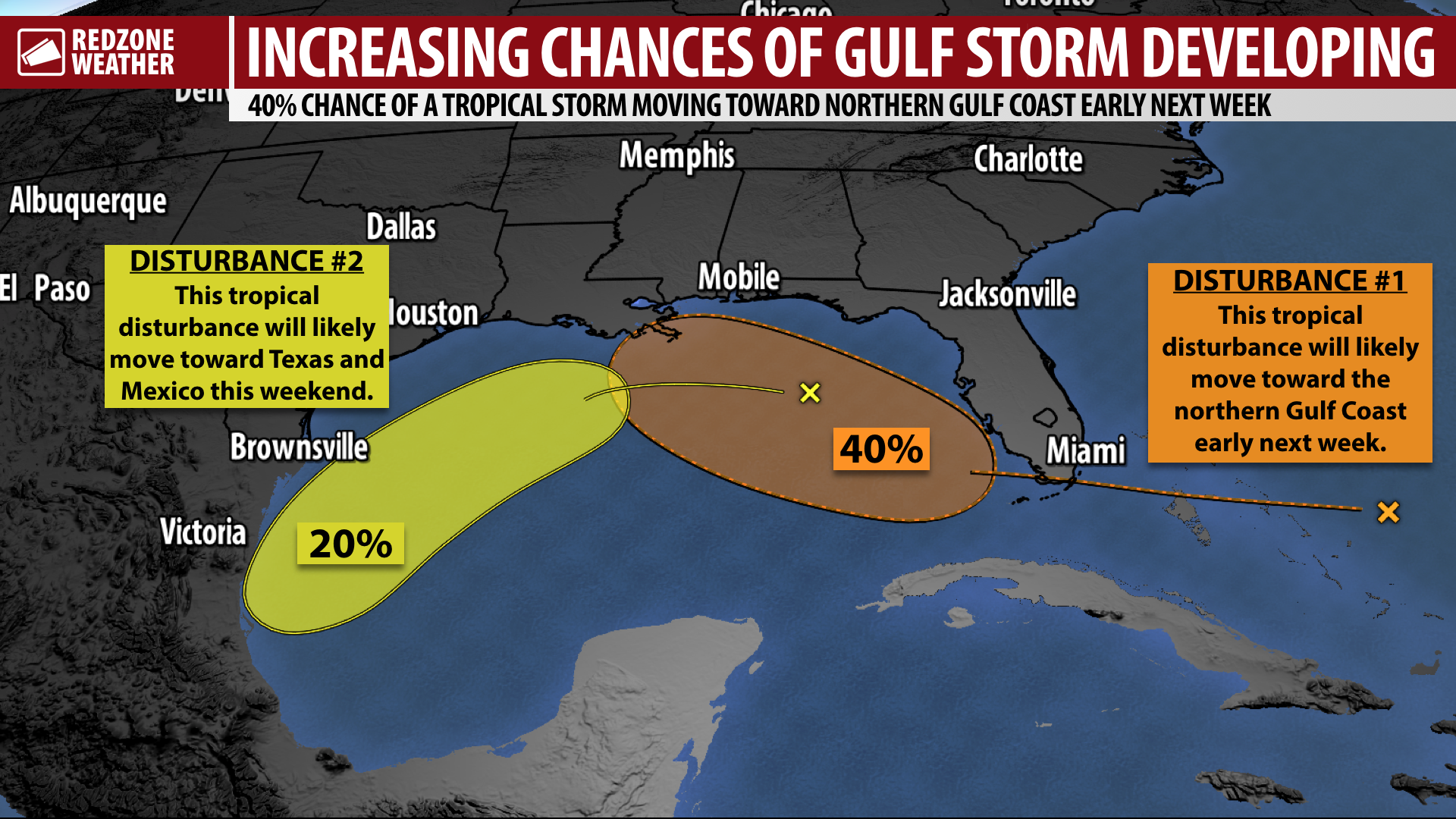 PEAK OF HURRICANE SEASON TODAY: 40% CHANCE OF TROPICAL DEVELOPMENT IN GULF… There is a growing (now 40%) chance that a tropical disturbance, currently moving into The Bahamas from the east, will become a tropical storm in the southeastern Gulf of Mexico early next week. We have reached the official peak of the 2020 Atlantic Hurricane Season as of tonight, and right on track, the tropics are *very* active. While it is too early to know if hazardous weather will be a possibility across our local area due to the disturbance likely to move into the Gulf, increased rain chances are expected across our local area due to this feature by Tuesday and Wednesday of the upcoming week. It is also too early to know exactly where this possible developing tropical storm will end up. Interests in Louisiana, Mississippi, Alabama, and Florida, including all of our local area, should closely monitor the progress of this developing storm. In addition, we’re also watching a distinct, separate area of low pressure currently in the central Gulf that will be pulled to the southwest toward the Texas or Mexico coastline in the days ahead. As if that isn’t enough, two more tropical waves are expected to emerge from Africa in the far eastern Atlantic in the days ahead. These two tropical waves have a 90% and 40% (respectively) chance of developing into named tropical storms. Below is a look at all of your tropical weather details on this Thursday evening.

PEAK OF HURRICANE SEASON IS TODAY… We have reached the climatological peak of the Atlantic Hurricane Season. While the next few weeks will likely to continue to be active in late September and early October, there is a good chance we will **finally** see quieter conditions in the tropics as we get into the second half of October and early November. Hurricane season officially ends on Monday, November 30. That is a day we all will be looking forward to enjoying.

SEPARATE DISTURBANCE TO MOVE TOWARD NORTHERN MEXICO… This evening, there is an open trough of low pressure located in the north-central Gulf of Mexico. This area of low pressure is basically due south of our local coastline. NHC suggests there is a low (10-20%) chance that this disturbance develops as it slowly moves southwest toward the Texas and Mexico coast this weekend into early next week. Direct local impacts, other than potential rip currents at area beaches, are not expected because of this system.

TROPICAL STORM PAULETTE LIKELY TO AFFECT BERMUDA AS A HURRICANE… I am thankful Tropical Storm Paulette has remained out at sea as the storm remains a considerable forecasting challenge. Paulette currently has maximum winds of 50 mph. The latest forecast for Paulette from NHC calls for the system to strengthen into a hurricane on Sunday before moving very near Bermuda on Monday. After approach to Bermuda, Paulette will likely begin rapidly moving northeast and out to sea into the north Atlantic Ocean. Direct local impacts from Tropical Storm Paulette in Alabama and northwest Florida are not expected.

RENE LIKELY TO BE A HURRICANE, BUT REMAIN OVER OPEN OCEAN… Tropical Storm Rene continues to move west-northwest across the east-central part of the Atlantic Ocean. Rene will likely become a hurricane on Saturday, but the entirety of the forecast track keeps the system completely out at sea in the days ahead. Rene is not a direct concern for Alabama or northwest Florida and direct local impacts are not expected.

TROPICAL WAVE LIKELY TO BECOME TROPICAL STORM SOON… There is a robust tropical wave, located “behind” or east of Tropical Storm Rene, emerging from Africa this evening. NHC says there is a very high (90%) chance that this system becomes a tropical storm in the days ahead. From NHC: “A tropical wave is located a few hundred miles southeast of the Cabo Verde Islands and is producing disorganized showers and thunderstorms. Gradual development of this system is forecast, and a tropical depression is expected to form by this weekend or early next week while the system moves generally westward across the eastern and central tropical Atlantic.” It remains way too early to speculate where this system will end up, although most major global models agree this system will likely take a route farther to the south than Paulette and Rene, meaning impacts to the Leeward Islands may be possible in about a week or so.

ANOTHER WAVE TO EMERGE FROM AFRICA… The “African wave train,” as it is known, is set to continue with yet another tropical wave slated to move into the eastern Atlantic by Sunday or Monday. NHC indicates there is already a 40% chance that this system will become a tropical storm as it moves west over the warm waters of the main development region of the Atlantic in the days ahead.

LOCALLY, SCATTERED STORMS THIS WEEKEND… Locally, we’ll have a round of showers and thunderstorms that develops on Friday, primarily in the afternoon and evening hours. This will be the trend into the upcoming weekend as well with pop-up storms possible in the P.M. hours each day. High temperatures are slated to remain around the 90 degree mark with morning lows in the low-70s.

APP… If you haven’t already, be sure to download the free RedZone Weather app to keep up with all the latest information on the world of weather in south Alabama and northwest Florida. redzoneweather.com/app is the link for the free download. Once you have the app downloaded to your iOS or Android device, be sure to visit the Alerts tab (lower right corner) and tap the large, yellow Alert Settings button to customize the alerts you would like to receive straight from me.

NEXT UPDATE… I will have a detailed forecast video posted by 7:15AM on Friday with the very latest information on the active tropics. Have a nice Thursday evening!