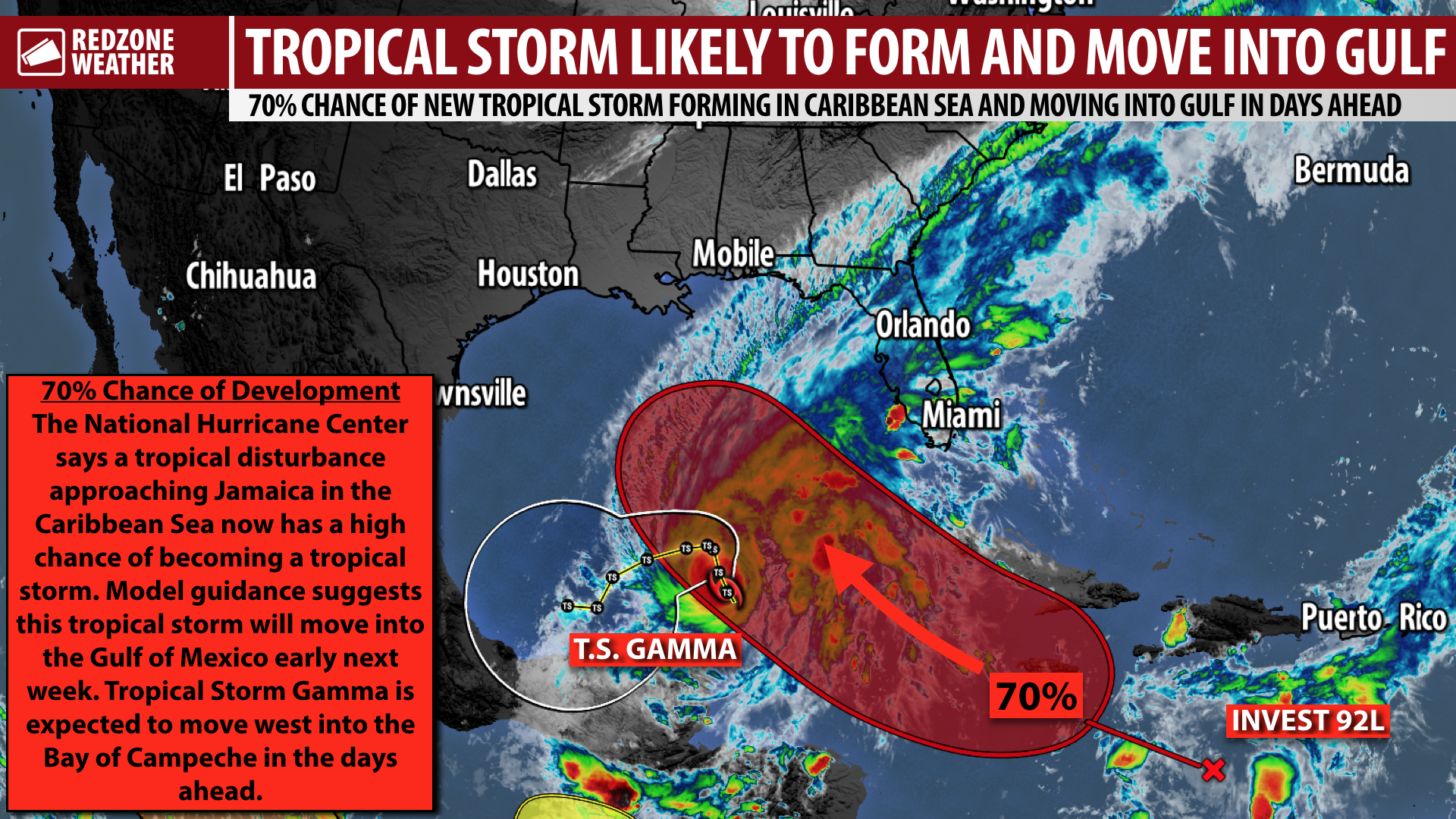 RZW EXEC: TROPICAL STORM LIKELY TO BE SOUTH OF US BY MIDWEEK… RZW Exec partners, I hope each of you are having a nice Saturday evening. There is now a high (70%) chance that a tropical storm will develop in the northwest Caribbean Sea (totally separate from ongoing Tropical Storm Gamma) in the days ahead. This new tropical storm will likely be in the south-central Gulf of Mexico by Wednesday of the upcoming week. It is far too early to know if impacts will happen in south Alabama and northwest Florida because of this developing storm, but that IS a possibility based on some of the major global models. Our detailed post (below) outlines what we know and what we do not know on this Saturday evening. I will have another RZW Exec update on this developing situation on Sunday. Please let me know if you have any questions.

TROPICAL STORM LIKELY TO BE IN CENTRAL GULF BY MIDWEEK… There will likely be a tropical storm just to our south in the south-central Gulf of Mexico by the middle part of the upcoming week. The National Hurricane Center has upped the odds of development for this system to 70%. This developing storm is totally separate from Tropical Storm Gamma, which is currently centered inland over the northeastern corner of the Yucatan Peninsula. Gamma will not be a concern for us locally anytime soon (if ever), but this other developing storm could be a different story. While it remains too early to know the exact future track of this developing storm, we note that some of the major global models show a weak tropical storm moving north toward Louisiana, Mississippi, Alabama, or northwest Florida. All of our Saturday evening forecast notes are below.

70% CHANCE OF TROPICAL STORM DEVELOPING IN CARIBBEAN… There is now a 70% chance that the tropical disturbance currently situated in the central Caribbean Sea will become a tropical storm over the next 5 days. The system will likely develop near or just northwest of Jamaica in the northwest Caribbean Sea. Where the exact low-level center of circulation develops could tell us quite a bit about the future track of the storm. If the low-level center develops on the eastern flank of the development probability zone and hugs the Cuban coastline for a few days as it treks northwest, the system may emerge as a weaker storm in the Gulf of Mexico early next week. The Florida Keys may have impacts from this developing storm under this scenario. On the contrary, if the low-level center forms a bit farther west, land interaction with Cuba may not be as much of a hinderance and the storm could be stronger when it moves into the Gulf.

LOCAL COASTAL IMPACTS MAY BECOME POSSIBLE BY END OF NEXT WEEK… Let me vehemently emphasize on this Saturday evening that we DO NOT KNOW exactly where this developing storm will go. Could it be a potential issue for our local area in south Alabama and northwest Florida? YES, it absolutely could, especially in terms of coastal impacts. On the flip side, there IS a significant chance we won’t ever deal with any significant impacts from this developing storm at all. It simply is too early to know specifics, but being that impacts will be possible, this means we all need to keep an eye on this storm in the days ahead. Be sure to check back with me for updates on Sunday and into early next week!

TROPICAL STORM GAMMA OVER THE YUCATAN PENINSULA… Tropical Storm Gamma is located over the northeastern corner of Mexico near Cancun and Cozumel this evening. Maximum sustained winds are near 60 mph with minimum central pressure at 990 millibars. Gamma is moving northwest at 8 mph. The center of the storm is expected to move into the far southern Gulf of Mexico tomorrow (Sunday) morning before stalling out for a day or so. After that, Gamma will likely be pushed southwest into the Bay of Campeche where it will likely not move very much at all. This storm has already been a prolific rainmaker for northeastern Mexico on the Yucatan Peninsula. More rain and flash flooding issues are expected there in the days ahead. Gamma will not be an issue for our local area in the next 5 days, however.

GAMMA INTERACTION WITH OTHER TROPICAL STORM POSSIBLE… Thinking back to several weeks ago, there was a huge interest in a potential Fujiwhara interaction between Hurricane Laura and Hurricane Marco. That never really happened as Marco faded away and Laura ended up being a massive, powerful, category 4 hurricane that slammed into southwest Louisiana. Some model guidance does suggest that Gamma and this developing storm (likely Delta-to-be) could potentially interact with one another next week. This is more of a curiosity than anything else at this point, but the ramifications are that Gamma may act to swing Delta-to-be a bit farther west. These storms likely would not merge since they would be similar in strength during their Fujiwhara interaction, and no, these storms would not come together to form a “superstorm.” I had that question more than you would like to believe during the Laura/Marco scenario a few weeks ago. The “superstorm merger” idea is not realistic.

HIGH CONFIDENCE: DEVELOPING STORM, IMPACTS POSSIBLE FOR CUBA… Just to recap what there is HIGH confidence in this evening: A tropical storm will likely develop in the western Caribbean Sea near or south of the southern coastline of Cuba. This storm will likely emerge into the far southern Gulf of Mexico some time early next week.

VERY LITTLE CONFIDENCE: GULF OF MEXICO TRACK… What we simply cannot know this far out is where the developing storm will ultimately end up. One good thing working in our favor is that Hurricane Sally significantly cooled the sea surface temperature of the northern Gulf of Mexico. The prolific rainfall combined with the storm’s slow movement mean water temperatures are not nearly as supportive for a strong hurricane at this point. It remains to be seen whether this storm can even reach the northern Gulf. Something to watch in the days ahead.

MOSTLY SUNNY, NICE SUNDAY LOCALLY… Skies will remain mostly sunny on Sunday across south Alabama and northwest Florida. High temperatures will peak near 80 degrees in most spots. There could be a few passing clouds, especially across northwest Florida and near the Alabama beaches. These clouds are actually streaming northeast along an old frontal boundary that extends southwest to Tropical Storm Gamma. Again, Gamma will not be a concern for the local area anytime soon (if ever). The bigger concern is definitely the developing tropical disturbance approaching Jamaica in the Caribbean Sea.

NEXT NAMED STORM: DELTA… We have been naming tropical storms from the Greek Alphabet over the last few weeks since we ran out of the standard English alphabetical list for the 2020 season. Subtropical Storm Alpha was the first Greek-named storm. It moved into Portugal and Spain a few weeks ago. Tropical Storm Beta developed in the Gulf of Mexico and moved into Texas before its remnants moved near and just west of our local area. Gamma is over the Yucatan Peninsula now. The next name in the Greek Alphabet is Delta. Beyond Delta, the following names would be Epsilon and Zeta.

APP ALERTS… Many updates will be posted throughout the day in the RedZone Weather app. redzoneweather.com/app is the link for the free download. Be sure to visit the Alerts tab (bottom right corner) and tap the large, yellow “Alert Settings” button to customize the alerts you’d like to receive from me. If you like a lot of info, be sure to toggle ON Low-Level Alerts.

NEXT UPDATE… I will have your next highly detailed video and longer form text discussion posted tomorrow (Sunday) afternoon. Enjoy the ongoing college football games tonight. Have a great Saturday evening!