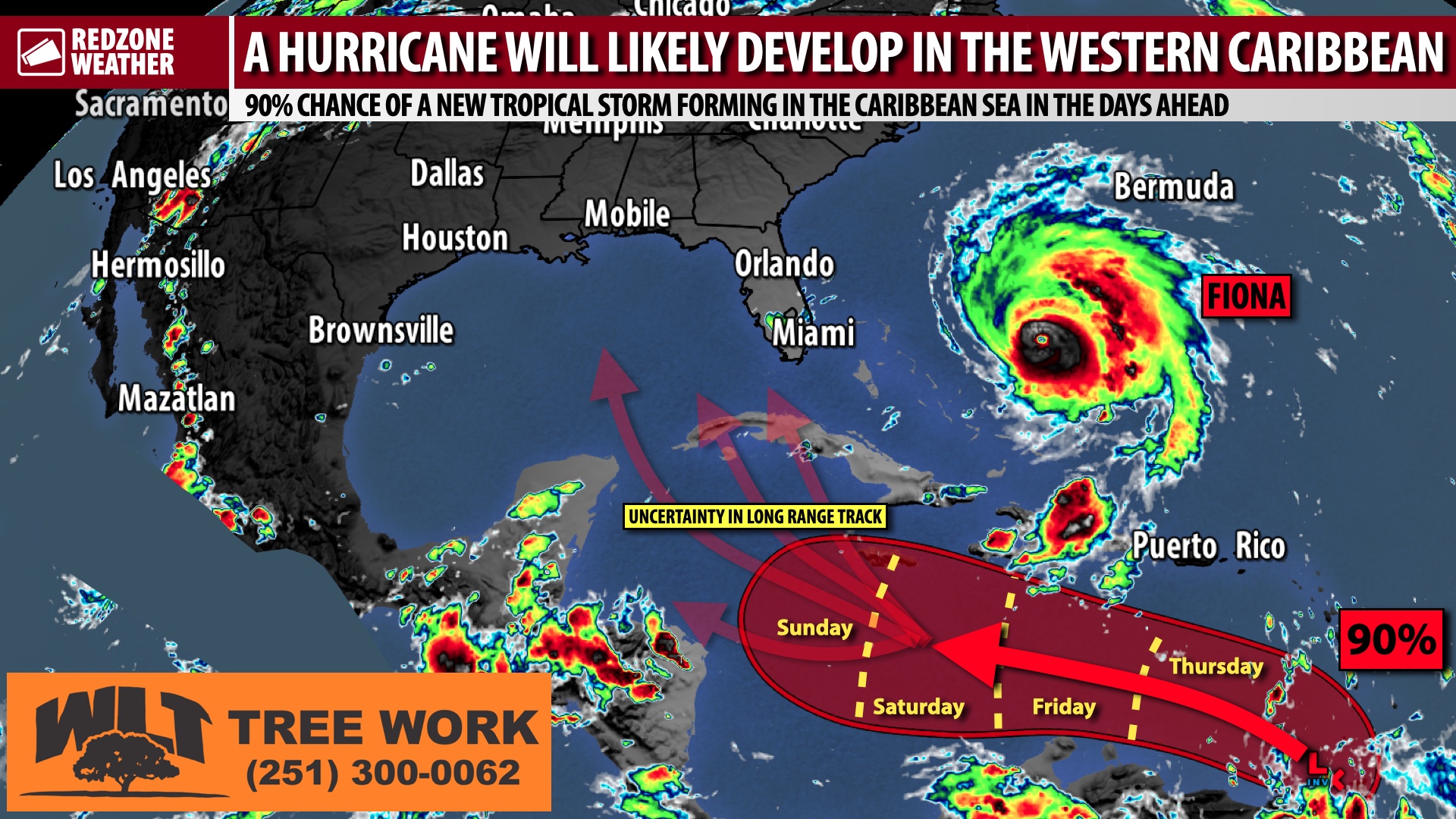 TROPICAL STORM EXPECTED TO FORM IN CARIBBEAN; LOTS OF UNCERTAINTY FOR NEXT FEW DAYS… The National Hurricane Center indicates a high (90%) probability that a tropical storm will form in the southern Caribbean Sea over the next several days as a tropical disturbance continues moving west. While we do not have a clear cut answer of where this system will ultimately end up, there is ample evidence to suggest this system may become a hurricane, perhaps a powerful hurricane, in 4-5 days in the western Caribbean Sea. Even that, however, is not a certainty at this point. Below are the key points everyone needs to be aware of on this Wednesday evening.

FORECAST UNCERTAINTY TO PERSIST FOR NEXT SEVERAL DAYS… Unfortunately, the uncertainty surrounding INVEST 98L will probably continue in a rather significant way over the next 2-3 days until the system gets well-established in the central or western Caribbean Sea. Major weather models typically do not do the best job of nailing down specifics about a tropical system when no low-level center of circulation exists. For now, no low-level center exists. Once the low-level center develops, that is when the system will become a tropical depression or tropical storm. I expect that to happen in 2-3 days when the system is somewhere near or south of Jamaica in the Caribbean Sea. It IS possible that the system becomes a tropical storm a bit sooner than that or later than that, but generally 2-3 days from now is a good estimate of when this system should be a named tropical storm in the Caribbean Sea.

THE HYPE & FEAR MACHINE HAS GONE CRAZY… There has never been an unnamed, undeveloped tropical system that has generated this much hype, this much buzz, and this much nonsense this far out. The thing hasn’t even developed and you would think the world is ending if you trust these viral, crazy social media pages OR even some in the national media. As previously discussed in my post yesterday about this system, I believe this insane level of hype and hyperbole is because we have had such a quiet hurricane season in the Gulf region so far. The hype and hyperbole machine has not had much to clamor about so far. Now they do with all these wild, crazy single run model images. Just know there is zero reason to be anxious or afraid at this point. Do not let these hype-loving lunatics make you afraid. There is no skill in forecasting weather events beyond seven days out. That is the generally accepted practice in the meteorological community. As I always tell the students in the weather presentations I conduct across the region, “be prepared, not scared.”

EASTERN SIDE OF GULF HAS GREATEST RISK, IF SYSTEM DEVELOPS AND MOVES NORTH… Looking at some of the factors that ultimately could steer a hurricane in the southern Gulf next week, based on the evidence across models, I would suggest the *eastern* half of the Gulf of Mexico region are the land areas in America with the slightly higher risk for potential impacts IF (big IF!) this system moves into the southern Gulf of Mexico. The eastern half of the Gulf includes places from the Mississippi coast and points east. Mobile, Pensacola, Destin, Panama City, Apalachicola, the Big Bend region, Cedar Key, St. Petersburg, Tampa, Ft. Myers, and the Florida Keys. Again, it should be vehemently emphasized that it is very early in the model guidance and even this large generalization is subject to change. A large upper trough over the central U.S. extending into the Deep South coupled with an area of high pressure slated to set up across the western Atlantic Ocean will provide somewhat of a large “glide path” for a storm to move north or northeast. Where hurricane impacts will happen specifically, however, remains impossible to know at this point OR even IF those impacts will happen.

APP… If you haven’t already, be sure to download the free RedZone Weather app to keep up with all the latest information on the world of weather in south Alabama and northwest Florida. redzoneweather.com/app is the link for the free download. Once you have the app downloaded to your iOS or Android device, be sure to visit the Alerts tab (lower right corner) and tap the large, yellow Alert Settings button to customize the alerts you would like to receive straight from me.

I will have a fresh look at the local forecast and a detailed tropical update posted by 7:15AM here on Facebook and in the RedZone Weather app. Have a nice Wednesday evening!