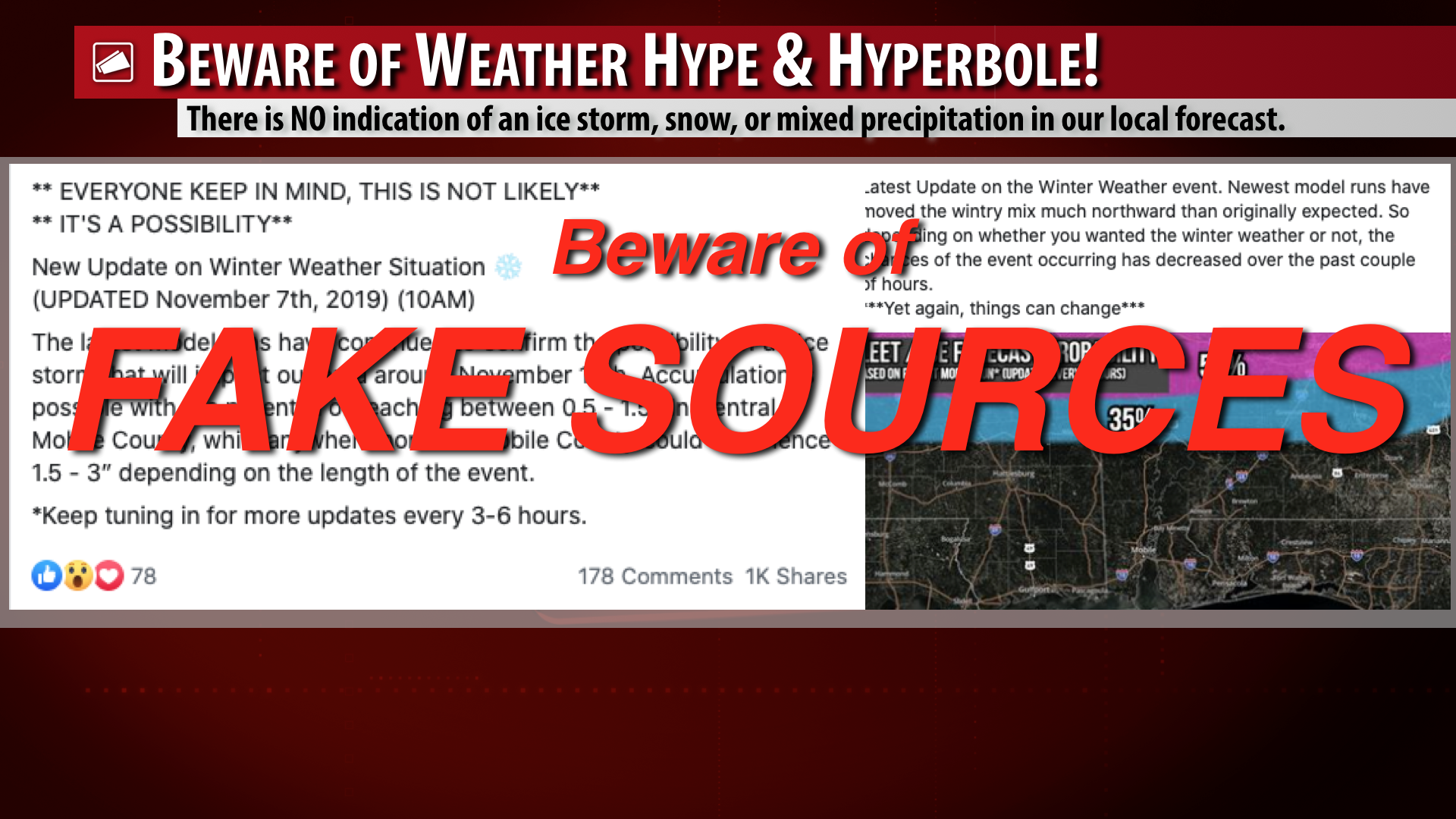 FAKE, VIRAL POST SAYS ICE STORM COMING. THAT IS JUST PLAIN WRONG… It is one of the great problems of our time that any person can make a weather page on Facebook and make fake news go viral to the masses. Today’s edition of fake news says an ice storm is coming to Alabama. That’s just down right wrong, yet the post(s) in question have gone viral today. Rain is possible Monday into Tuesday as a strong cold front approaches from the northwest. Cold temperatures are expected Tuesday through Thursday of the upcoming week and overnight lows on Wednesday morning could easily be in the upper-20s across our region. To suggest that an ice storm will happen is not only wrong, there’s no data to support that idea at this point.

GFS TRENDS DRIER; NO ICE STORM LOCALLY… The reason all of these insane, viral posts are happening is because of 2-3 operational runs of the Global Forecast System from the last few days that incorrectly suggested the potential for ice and snow next week across the Deep South. Let’s be unequivocally clear in saying winter weather (specifically snow and ice situations) are incredibly difficult to forecast in the Deep South. The GFS model (and other weather models) regularly “pull stunts” like this that are to be completely discarded. Anyone, and I mean ANYONE, that tries to pinpoint a snow or ice accumulation 2 days out, or especially 5-6 days out, is trying to “pull a fast one” on you. That is a forecast that simply cannot be done accurately. There is no skill in trying to forecast snow amounts in the Deep South beyond 24-48 hours out at the latest. It’s next to impossible.

RELIABLE SOURCES HAVE NAMES ATTACHED… I can only imagine that every legitimate meteorologist feels the same way when I say it is incredibly frustrating to see WRONG, bad weather information go viral at the drop of a hat. What makes it worse is when the bad information is specifically for our local area. Facebook pages like “(insert city name here) Weather Center” and “X County Weather” are generally not legitimate meteorologists running the pages. How do we know this? Because the ladies and gentlemen that actually went to college and got a degree in meteorology, geography, electronic news, and associated fields aren’t afraid to put a name on their page for accountability purposes. Legitimate sources aren’t anonymous cowards hiding behind the keyboard spewing fake news to the masses! It’s wrong, it’s dangerous, and as far as I’m concerned, we should call it what it is: Fake news!

SCATTERED SHOWERS & STORMS HAPPENING THIS EVENING… Areas of heavy rain are happening this evening as of 7PM CST across southwest Alabama and northwest Florida. At the time this update is being produced at 7PM, heavy rain is happening near Brewton, Gosport, Brooklyn, Andalusia, Milton, Pace, Robertsdale, and Bayou La Batre. Storms appear to be weaker overall than earlier this evening when there was more atmospheric instability in place. The overall risk of severe weather is now very low. Showers and storms will continue overnight into early Friday morning before cooler, drier, stable air moves in from the northwest behind the advancing cold front.

My next forecast video will be posted no later than 7:15AM on Friday. See you then. Have a great evening!