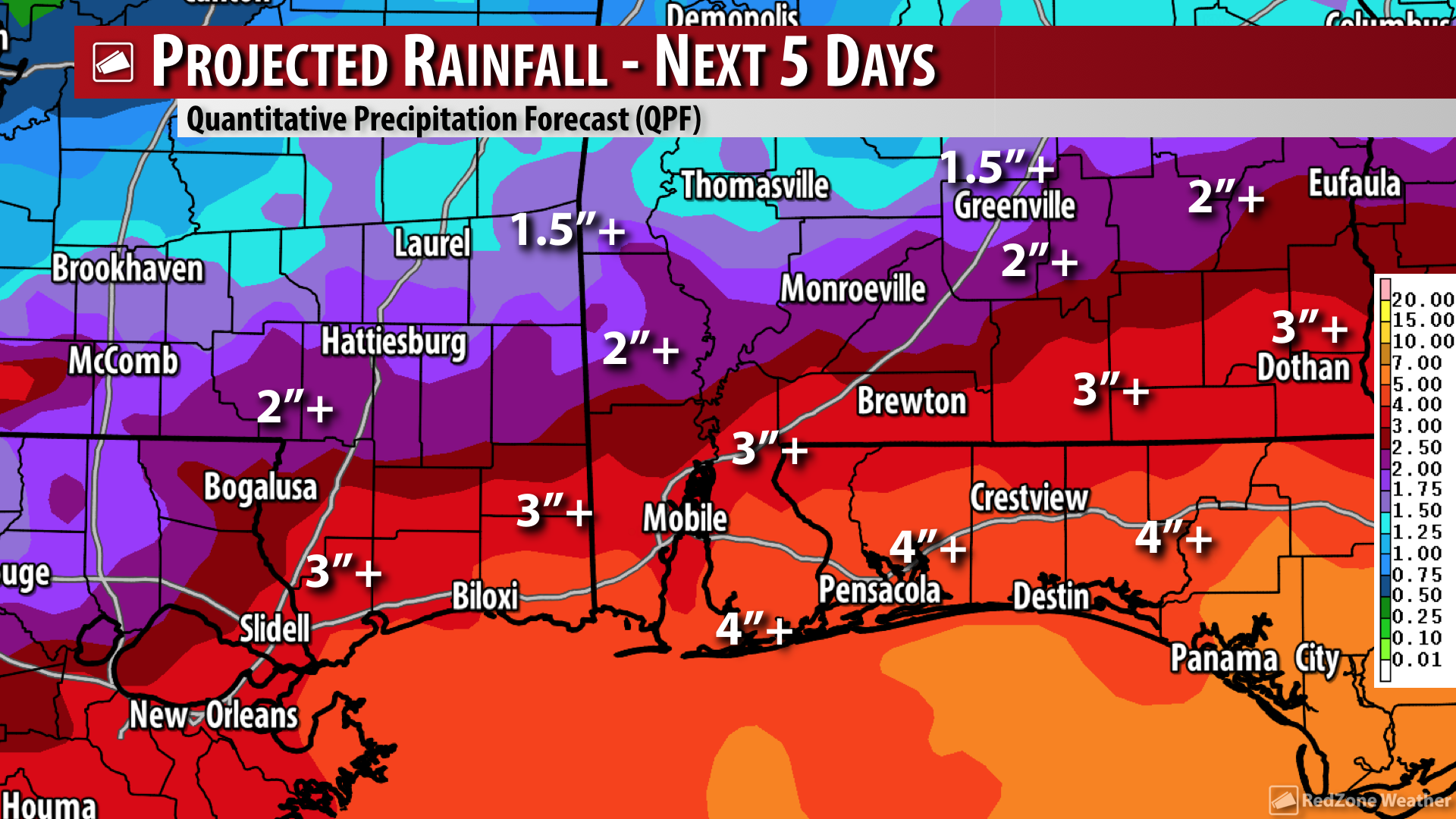 RZW EXEC: CRISTOBAL – WEDNESDAY UPDATE… RZW Exec partners, good Wednesday afternoon. We are tracking Tropical Storm Cristobal, currently situated onshore in eastern Mexico near the Bay of Campeche. The system is currently near the Mexican coastline and will meander over the same area for the next 24-36 hours. Dangerous mudslides and flash flooding are ongoing across parts of central America due to this system. Cristobal will slowly begin to move northward across the Gulf of Mexico on Friday. Forward speed will increase as the southerly flow pushing the system begins to increase. Gradual strengthening of Cristobal is expected as the storm crosses the Gulf, but I don’t expect rapid or extreme strengthening as upper-level shear should keep the system in check as the center approaches the Louisiana coastline on Sunday into early Monday. Please keep in mind that impacts can and will extend far from the center of circulation. This means that our area will have at least SOME level of impact from this system. Here is the breakdown on expected impacts…

Overview: Tropical Storm Cristobal will make its closest approach to our local area Sunday night into Monday. Cristobal will bring a period of wet/stormy weather to our region with heavy rainfall and flash flooding being the main concern. Isolated, brief tornadoes may become an issue near the immediate coast. At this point in the forecast, high winds are NOT expected locally, although breezy (15-25 mph winds) will be possible near the coast on Sunday, Monday, and Tuesday.

Threat Levels & Locations: ALL of south Alabama and northwest Florida will have the potential for heavy rain and flash flooding this weekend into early next week. The tornado risk will likely be confined to the immediate coastline. We may have to introduce a low-end tornado risk for west Alabama later this week, depending on the exact future track of Cristobal.

When: Heavy rain will be possible from Saturday through Tuesday. The risk of isolated tornadoes will be greatest Sunday into Monday.

Potential Hazards: Heavy rain and flash flooding will be the main concern. Isolated tornadoes will be possible, especially near the coast. Coastal flooding and beach erosion will be possible. Dangerous rip currents and high waves are expected at all local beaches.

Forecast Confidence: Medium-High. Model guidance has consistently pointed to a Louisiana landfall for Tropical Storm Cristobal, thus it looks like our overall impacts discussed above won’t change that much. IF the projected path of Cristobal changes significantly (not expected, but still a possibility), we will need to adjust impacts to account for the change.

As always, please let me know if you have any questions or have specific decision support needs. Below is the public, long form updated that will be posted later today. Have a great weekend! 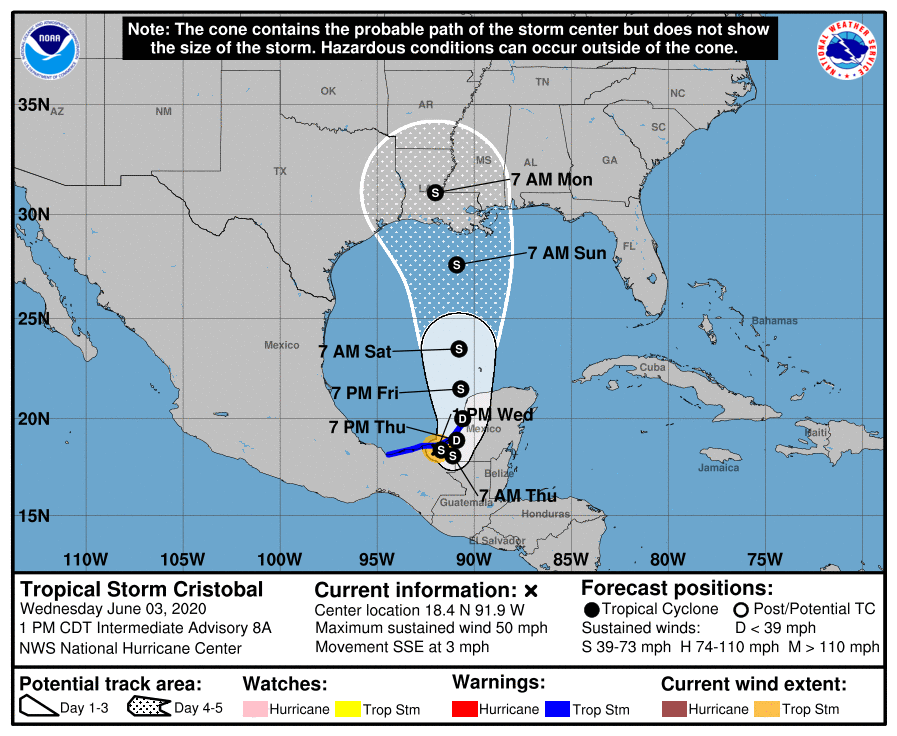 CRISTOBAL TO BRING HEAVY RAIN & STORMS TO LOCAL AREA SUNDAY INTO MONDAY… Unsettled weather is expected across the local area as we go into the weekend and early next week as Tropical Storm Cristobal approaches from the south with a landfall point in Louisiana looking increasingly likely. Heavy rain, gusty winds near the beach zones, and isolated tornadoes will become possible Saturday evening, Sunday, Monday, extending perhaps into early Tuesday. 3 to 6 inches of rainfall in total over the next several days will be the main concern locally with this system as flash flooding will be increasingly possible. There are many folks with questions about vacation plans. We’ve got that covered for you below. We’re also diving into the details concerning potential local impacts. See all of the specific information below…

SPECIFIC LOCAL IMPACTS FROM CRISTOBAL… Let me preface all of this by saying that IF significant forecast path adjustments are needed (not expected at this point, but still a small chance), we obviously will need to adjust the specific local impacts. For now, the biggest concern with Cristobal for south Alabama and northwest Florida will be heavy rain that could lead to flash flooding. 3 to 6 inches of rainfall in total are expected over the next 7 days across our area, with the greater amounts (5-6” of rain) likely happening near the Alabama and northwest Florida beaches. Gusty winds (20-30 mph) will be possible at the immediate beach zones and near local bays and inlets on Sunday into Monday as Cristobal comes onshore to our west. Isolated, brief, spin-up tornadoes may become an issue Sunday into Monday near the coast. That is a potential we’ll have to watch over the next few days as specifics come more into focus. High waves and dangerous rip currents will also be likely at the local beaches. Coastal flooding and beach erosion could happen as well.

TO CANCEL OR NOT TO CANCEL YOUR BEACH TRIP… This weekend is going to be quite soggy, to say the least, at the Alabama and northwest Florida beaches. The greater rain chance will inevitably be on Sunday into Monday, but there will be scattered to numerous showers and storms involved on Saturday as well. I continue to receive questions about vacation plans and trips to the local beaches on this Wednesday. I can’t really give specific recommendations as everyone has a different tolerance as to what they’re willing to deal with, but what I can tell you is confidence is now high that rain (with heavy rain at times) will be happening for much of the day on Sunday and on Monday. Beach access will probably be limited or closed with double red flags likely at most local beach locations. Rain chances will remain high Tuesday into Wednesday as an anomalously high amount of Gulf moisture continues to stream into our region long after Cristobal makes landfall to our west.

1PM WEDNESDAY ADVISORY – TROPICAL STORM CRISTOBAL… The latest advisory from the National Hurricane Center as of 1PM CDT on Wednesday, June 3 continues to indicate that Cristobal is not moving very much at all. The system is moving to the south-southeast at 3 mph. That means that this large tropical system is dropping very large amounts of rain over eastern Mexico, Guatemala, Belize, El Salvador, and Honduras. As of 1PM, the center of Tropical Storm Cristobal is located at 18.4° North and 91.9° West. That is basically right over Ciudad Del Carmen, Mexico. Maximum sustained winds are at 50 mph. Minimum central pressure is at 996 millibars. Further weakening is expected as Cristobal continues to interact with the land area of eastern Mexico.

CRISTOBAL LIKELY WON’T MOVE MUCH IN THE HOURS AHEAD… Unfortunately for Mexico and central America, Tropical Storm Cristobal won’t be moving that much over the next 24-36 hours. This will allow ongoing mudslide situations to get worse. Cristobal will slowly begin to lift northward across the eastern part of the Bay of Campeche (southern Gulf of Mexico) on Friday. Keep in mind that even on Saturday morning, this storm will still be in the southern part of the Gulf of Mexico. The faster, northerly movement will commence during the day on Saturday.

CENTER OF CRISTOBAL TO APPROACH LOUISIANA ON SUNDAY INTO MONDAY… The latest projected path from the National Hurricane Center shows the cone of uncertainty extending from Houston, Texas eastward to Mobile, Alabama. This is the stretch of coastline where a landfall point is most likely to happen. This means that the state of Louisiana is directly in the center of the cone of uncertainty, meaning landfall is most likely to happen somewhere in that state. NHC ramps the system up to a formidable tropical storm (max winds of 65 mph) right before landfall. There is an off chance that Cristobal briefly becomes a hurricane before landfall. One bit of good news is that southwesterly shear will likely be increasing as Cristobal moves north across the Gulf, thus potentially helping to limit overall strengthening.

TROPICAL STORM WATCHES TO OUR WEST TOMORROW OR FRIDAY… A Tropical Storm Watch will become necessary for parts of Louisiana tomorrow (Thursday) or Friday ahead of Cristobal’s projected arrival on Sunday into Monday. There is a chance that parts of the Mississippi and perhaps even the Alabama coast will go under a Tropical Storm Watch as well, considering gusty winds (maybe as high as tropical storm force) will be a concern with this system.

RAIN CHANCES TO REMAIN HIGH INTO NEXT WEEK… The center of circulation associated with Cristobal will continue to move northward on Monday into Tuesday of next week. This will keep the overflow wind flow across our area out of the south, as we will likely remain on the eastern flank of the system. This will allow copious amounts of Gulf moisture to continue to move into our area, keeping rain chances high on Tuesday into Wednesday of the upcoming week. Scattered to numerous showers and thunderstorms are expected each day.